The best reflex hammer is a medical instrument used by doctors and other health care providers to test tendon reflexes. Reflex hammers are specially designed for reflection and impact testing, which points out the health of the nervous system. These percussion hammers are used in different places like Hospitals, Ambulatory Surgical Centers, Clinics, and Musculoskeletal Clinics.

Contact us to buy these best reflex hammers and types of hammers in bulk quantity. We deal in all models of hammers. These Percussion Hammers are made from high-grade raw materials, to assure high durability and rust-resistant quality. 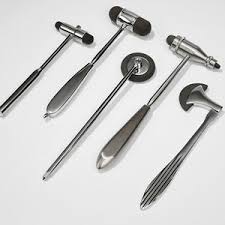 There is a wide range of kinds of reflexes, and best reflex Hammers are explicitly used to initiate deep tendon reflexes, which are related to muscle broadens. The crucial reflexes attempted are the biceps and brachioradialis, the back arm muscles, the patellar, and the lower leg. These reflexes are used to test the prosperity of both the central and periphery tangible framework and they can fill in as a notification sign of neuromuscular sickness. Experts look for both overactive and underactive reflexes, as either side of the reach can be an indication of a clinical issue.

These instruments are used to control thoracic and stomach percussion during general genuine appraisals. In a neurological test, testing tendon reflexes can show either a periphery or a central apprehensive issue.

Reflex Hammers fluctuate perfectly fiddle and materials. There are both adult and children’s models, similar to those proposed for a particular piece of the body. The most notable versions consolidate Babinski, Berliner, and Buck types. Some are multi-reason.

The choice will depend upon explicit arranged use, be it reflex tests, chest percussion, or another limit. The anatomical characteristics of the percussion zone are moreover huge.

The Taylor percussion hammer or reflex hammer was made by John Madison Taylor in 1888 and is the most outstanding reflex hammer in the USA. It includes a three-sided flexible section that is associated with a level metallic handle. The standard Taylor hammer is inside and out lighter in weight when appeared differently concerning the heavier European Hammers. Taylor Percussion Hammer is utilized for the overall symptomatic assessment of tendon reflexes. The Taylor hammer is a triangle shape by its three-sided head which gives one end which is pointed and another two points are straight.

This Queen Square reflex hammer is utilized by doctors for testing anomalies in the Central or Peripheral Nervous System (CNS/PNS). Its development incorporates a tightened plastic handle with a base, which empowers reflex testing, and a round elastic ring made of solid plastic. The Queen Square Hammerhead is conquered with an Aluminum Anodized plate scored to house the elastic collar. The weighted head and delicate elastic collar are fit in inciting myotatic reactions. The Handle comprises of a thin tightening handle. The tightened point is appropriate for inspiring plantar and stomach reactions. It was initially made with bamboo or stick the handle of changing length, of normal 10 to 16 inches (25 to 40 centimeters), joined to a 2-inch (5 centimeters) metal plate with a plastic bumper. The Queen Square mallet is likewise now made with plastic molds, and frequently has a sharp tightened end to take into account testing of plantar reflexes however this is not, at this point prescribed because of fixed contamination control. It is the reflex mallet of decision of the UK nervous system specialist.

Babinski Percussion Hammer is utilized in the demonstrative assessment of reflex reactions. This extraordinarily planned hammer has a crown-formed head that is rimmed with elastic to permit more prominent solace. This instrument includes a lengthened neck that flares for added hold and tightens once again into a fine point for use as an aesthesiometer to test material reflexes. The Babinski reflex hammer was planned by Joseph Babinski in 1912 and is like the Queen Square hammer, then again, actually it has a metallic handle that is regularly detachable. Babinski hammer can likewise be extended, taking into consideration conservative stockpiling. Babinski’s hammer was advocated in clinical use in America by the nervous system specialist Abraham Rabiner, who was given the instrument as a harmony offering by Babinski after the two fought at a dark tie issue in Vienna. (Wikipedia.org)

Troemner hammer can be utilized related to other careful gear to cut and in any case-control bone and arranged other hard tissue or when additional power is vital for an assortment of care situations. The interesting plan of this mallet includes an adjusted head on one side and around and a hollow level head on the rival side. Moreover, this mallet is accessible in two sizes either an 8 oz weight or 13 oz weight with a little face width or enormous face measurement. The Troemner reflex hammer was planned by Ernst Troemner. This model is formed like a two-headed hammer. The bigger hammer is utilized to evoke ligament stretch reflexes, and the more modest hammer is utilized to inspire percussion myotonia.

Dejerine reflex hammer is utilized for testing of tendon reflexes in the asymptomatic assessment. The Dejerine style hammer includes a two-sided head made out of two adjusted elastic surfaces for expanded patient comfort. This hammer incorporates a thin neck that flares into a more extensive handle for improved grasping.

A Neurological sled was used Buck reflex hammer to test reflexes and measure nerve affectability and a handle with a removable needle and brush for extra affectability testing. Buck Neurological Hammer is used for the insightful evaluation of both myotatic similarly as cutaneous reflex responses. The Buck hammer incorporates a two-sided hammer head made out of two flexible tips of vacillated size for ideal control and precision.

It wasn’t until the 1870’s that experts understood the advantage of using a clinical percussion hammer to test knee reflexes. The vital reflex hammer was made in 1888 by Dr. John Madison Taylor, an American sensory system trained professional. Starting now and into the foreseeable future, various other standard reflex mallets, which are additionally implied as percussion hammers, have been delivered to test the tactile framework.